WARNING: Aboriginal and Torres Strait Islander viewers are warned that this site may contain images and voices of deceased persons.

On Tuesday 20 August 2019, we had a whole-school assembly to celebrate two additional flagpoles being placed in the school.

The following speech was by Year 11 senior student Georgie Armer.

Hello, my name is Georgie Armer and I’m a proud Yuin woman and I’m honoured to be a part of the official flag raising ceremony today.

Flags are an important part of our identity. When we see them fly in their many colours and symbols, we feel connected, proud and have a sense of belonging.

The Aboriginal flag was first flown on the National Aboriginal and Islander Day in 1971 in Adelaide, and later in 1972, at the Aboriginal Tent Embassy in Canberra.

The colour black represents Aboriginal people; past, present and future; the yellow represents the sun, the giver of life; the red represents the earth, red ochre and spiritual relationship to the land.

The Australian flag was first created in 1901, and later that year was officially raised and flown in Melbourne.

An iconic symbol, the Southern Cross, representing us as the great south land … down under … a land of many nations.

The Torres Strait Islander flag officially flown in 1992. Its colours representing green for the land, blue for the sea, and black stripes for its island people.

Seeing the three flags be raised together and fly together, truly represents our commitment towards reconciliation here at Maclean High School. Today, the official raising of our three flags is an acknowledgement and a moment for the recognition of our shared histories … it proudly states that … together we are, together we can, and together we will. 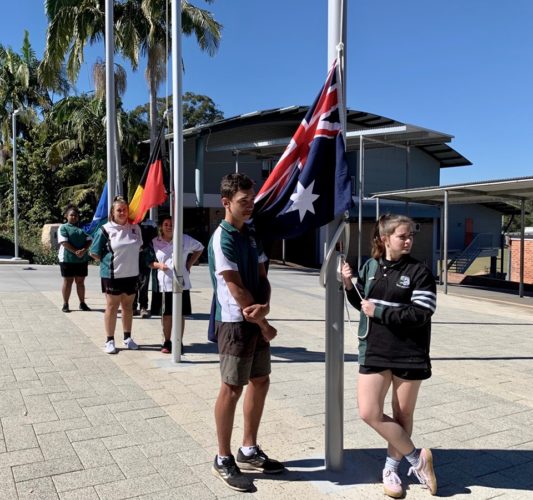